← more from
Whirlwind Recordings
Get fresh music recommendations delivered to your inbox every Friday.
We've updated our Terms of Use. You can review the changes here. 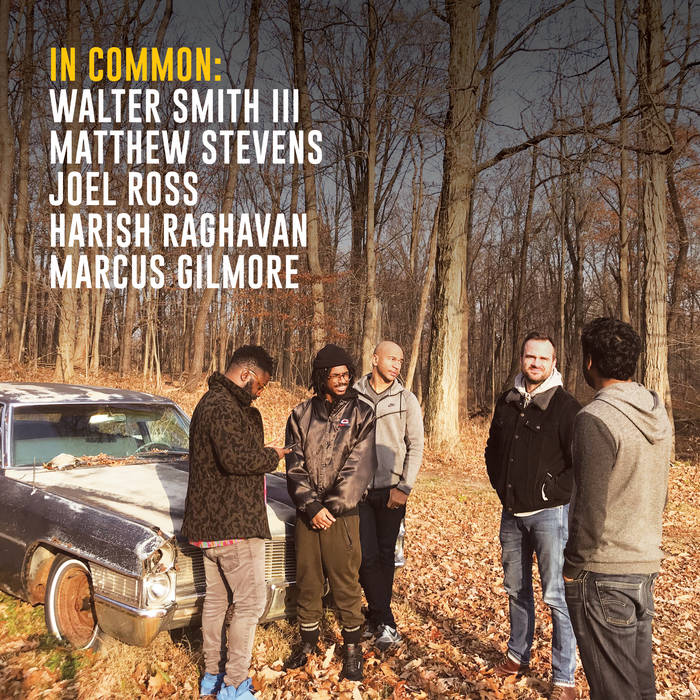 Pablo Tarantino It's a masterpiece, full of great melodies, harmonies and beautiful textures. The interaction between the musicians is really special. I enjoy every minute of it. Favorite track: ACE.

andybrass I love this whole album the but loose, loping groove of this track is just fantastic. Favorite track: ACE.

duane_harvey Nice laid back set from a group of guys generally known for music that is much more intense and complex. This lyrical album should have wide appeal. Smith's playing in particular is meltingly beautiful. Favorite track: ACE.

The moment when spontaneity and technical expertise coalesce into a decidedly different soundscape is captured convincingly in this eponymous debut release from In Common. Behind that veiled moniker are the prominent names of tenor saxophonist Walter Smith III and guitarist Matthew Stevens – and together with vibraphonist Joel Ross, bassist Harish Raghavan and drummer Marcus Gilmore, they fashion striking improvisations from original compositional foundations.

“Walter and I had been talking about putting a recording session together" explains Stevens, “and decided to go into the studio with music that could be quickly interpreted with an interesting group of musicians and to let it unfold naturally from there.” The resulting sessions yielded an unaffected and dynamic recording by a group of peers sharing a mutual musical vocabulary. “Part of the basis for the project was to write relatively simple music," says Smith. “The idea of simplicity downplayed individual ownership which was liberating.” The outcome is a collection of succinct, in-the-moment canvases that exhibit an engaging contemporary style.

Preceded by ‘freefive’, an improvised piece that captures the intangible moments that can arise between improvisers, Stevens’ ‘Unsung’ celebrates the overlooked in our society in a poignant song illuminated by Ross’s vibes. ‘YINZ’ – Pittsburgh’s version of ‘y’all’ - allows plenty of ducking and diving; and levitational ‘foreword’ centers around a rich duet between Smith and Ross.

The offbeat, almost Bachian ground of ‘ACE’ becomes filled out by Smith’s rich tenor, while ‘Baron’ is buoyed by syncopated drums and lush, animated guitar. Mysteriously striding ‘13th Floor’ contrasts with breezy ‘About 360’ and in tribute to the late Geri Allen, her ‘Unconditional Love’ is elegantly painted in new light.

The success of In Common's informal collaboration is in creating a work that is unmistakeably alive and instinctive.

"In Common conveys the shape and feel of traditional jazz while remaining harmonically untethered and melodically free... The best of both worlds."
★★★★1/2 DownBeat Magazine

"An excellent debut for the quintet and a follow-up should be eagerly anticipated."
★★★★ All About Jazz

"An inventive workout for a classy, likeminded and broadminded outfit."
Jazzwise Magazine

"An unaffected and dynamic recording of succinct, in-the-moment canvases that exhibit an engaging contemporary style."
Jazziz

"An album with a clean and pure quality to it... A treat to be so simply satisfying."
Nextbop

"Subtle, cool and laid back... Gentle explorations executed without bravura but with no lack of technique."
Bebop Spoken Here

"The part composed, part improvised statements of “In Common” speak succinctly and elegantly... The music is full of excellent ideas and some frequently wonderful playing."
★★★★ The Jazz Mann

"The hyperfluency among these players is never exploited for flash, or mistaken for the main point. It’s simply a means to more lyrical ends, and folded into a model of interplay that suits the name of the band."
WGBO

"Striking improvisations from original compositional foundations... The success of In Common's informal collaboration is in creating a work that is unmistakably alive and instinctive."
Drumhead Magazine

"A most pleasing listen."
Citizen Jazz

"Matthew Stevens alternates between giving the greatest backing on the guitar and taking the lead without running out too far ahead seemingly from moment to moment. Walter Smith III ties all of this together on the saxophone, providing sweetness that makes this album sing."
Nextbop

"On 'ACE', Stevens’ ultra-minimal, rock-steady guitar work, over Gilmore and Raghavan’s slowly thwacking beat, allow Smith and Ross to take beautifully expressive solos and also respond to each other in an extremely empathetic and collaborative manner."
Stereogum

"An outstanding release of modern jazz that shows that progressive musical ideas don’t have to come at the cost of listenability."
Jazz Views

"Impressive improvisations from their original compositions... that moment when spontaneity and technical mastery merge into a singular soundscape is captured convincingly in the eponymous album of "In Common"."
France Musique

"A journey into a rich and intelligent musical universe."
ICI Musique

“A palpably collective expression of living in the moment and making music accordingly with each musician stepping in and out of the limelight to take a solo and a proverbial bow before receding into the ensemble thereafter.”
JazzdaGama

“Smith and Stevens set the style of the sound... A delightful duo.”
Jazzma

“These (works) are, in sum, sincere and poised accounts of musicianship, a tribute to the faultless character of each individual who contributes in spades to this group as a whole.”
JazzdaGama

"A intense, playful, contemporary jazz album with a fine cast who all have something to say... immensely enjoyable.”
★★★★ Drums & Percussion

“Stylistically oriented in jazz history, from hard bop to fusion elements, through free design to romantic a successful merger delivered with dramlike security.”
Musik an sich

“A harmonic flow of spontaneity and technical expertise.”
★★★★ Stereo